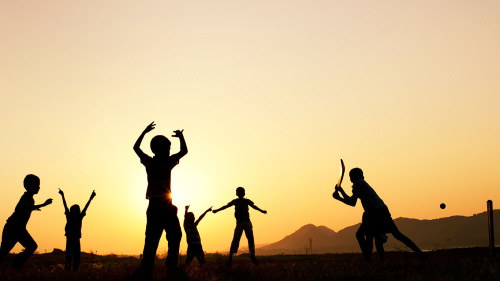 From The Valley
by C Louis Leipoldt

To the Reverend Mr Mance-Bisley it was unbelievable that there should exist in the British Empire a school – with a senior secondary section containing sturdy, well set-up lads preparing for their matriculation – which did not play cricket. He was horrified when he found out that not one boy in the village possessed a cricket bat, and that a set of wickets and a few broken bails were all that could be procured after a careful canvass. He promptly sat down and wrote to a firm in Cape Town, and in due course several sets of cricket implements arrived with the post-cart and were taken to the school. At morning assembly he spoke enthusiastically on the subject. He took ‘cricket’ as his text, and although he was too conscientious a man and too experienced a teacher to refer to the possibility that some future South African battle might be won on the cricket field, he made it clear that he expected every boy to consider it his duty to learn to play cricket.

‘Shall we go in, Mr Quakerley?’

‘No need, rector, no need. I merely came to introduce this young shaver to you. He’s my grandson, Charles Crest, though why they didn’t call him Andrew I can’t make out. From Australia, you know. I thought you might like to have him in your class.’

‘Term’s almost at an end,’ the rector said, studying the boy. ‘He’d better enter in January. What standard is he in?’

‘I really don’t know. I suppose the Australian schools have different standards from ours. You might put him through his paces, rector, if you please. Come, Charlie, tell Mr Mance-Bisley what you can do.’

‘Sums and reading and writing,’ said the boy shyly. ‘And map drawing and history, granddad. And we started algebra just before we left.’

‘How old are you?’ asked the rector, noting with satisfaction that the boy had good manners, bore himself with a certain childlike dignity, and spoke without a trace of the ‘colonial’ intonation so annoyingly prevalent among the village youth.

‘Ten, sir,’ came the reply, and the rector was still more satisfied with the answer. Obviously the lad had been well taught. The village schoolboys tacked ‘sir’ onto their replies as an afterthought, and usually omitted it altogether. There was something strangely likeable in the little fellow, something that reminded one of small boys in an English preparatory school, something altogether different from the brown, sturdy boyhood in this semi-tropical part of the world, where the co-existence of two languages played havoc with accent and correct speech. Old Andrew had moved away, his interest caught by something that grew in the garden, but although the boy’s eyes followed his grandfather he made no movement to accompany him, but stood respectfully at attention.

‘We shall have to see what you can do, Crest,’ said the rector. ‘I think you’d better come to me this afternoon and bring your books with you. Have you started Latin yet?’

‘Hmm, you’ll have to make a start with it sometime and you might as well begin now. You should have started long ago. I suppose Mr Quakerley wishes you to matriculate. Well, we’ll see about that. Perhaps you may be fit for standard five, or four at least.’ He turned to the old man, who was interestedly examining a clump of yellow flowers that grew on a sandy patch close by. ‘Perhaps you’ll let him come and see me this afternoon, Mr Quakerley.’

Charlie, told to run away and play, had obeyed his grandfather to the extent of wandering towards the water furrow and the little bath-house, shaded by leafy oak trees, and had found, leaning against the bath-house door, a cricket bat with which he was now blocking imaginary balls whizzing past the bath-house steps. Mr Mance-Bisley felt an emotion that surged up in him like a wave. There was grace, action; there was evidence of that instinctive liking whose absence among his boys he had so often deplored. He startled the old man by bounding forward, and crying – for Mr Mance-Bisley was impetuous and excitable – at the top of his voice, ‘Wait, wait! I’ll get the ball and bowl to you.’

He divested himself of his coat, turned up his shirt sleeves, shortened his braces by two holes, and bounded – with an agility one would scarcely have expected from a person so sleek and so chubbily rotund – over the garden path while he bowled. How his spectacles remained on during these vigorous exhibitions of arm- and leg-play was a miracle, but they did; and they evidently served him well for he bowled with skill, maintaining a good length and varying his pace. The little batsman took the bowling with some trepidation at first, but steadied in a manner that both grown-ups liked to see, and snicked and blocked with commendable judgment. Old Andrew admired the easy grace of the boy who, flushed with excitement and eagerness, handled a bat obviously too large for him with a dexterity that showed he had had some practice. The rector noted the faults, the imperfections that revealed bad training, the wasted effort in strokes that should have been made differently, but he also observed the quickness of eye and hand, the alertness of the player and the courage with which the boy faced the bowling. The youngster was untrained but he had style, and there were the makings of a fine cricketer, or at least a fine batsman, in him.

The rector, heated by his exertions, handed the ball to Charlie. ‘Let’s see what you can do with the bowling,’ he remarked. ‘Just a minute, Mr Quakerley, but I really must try him with the ball.’

‘There,’ he said, after he had dealt with the bowling and noted once more that although there were plenty of faults to be corrected in the boy’s action, there were certainly also points which any cricket coach would have appreciated. Mr Mance-Bisley, who adored cricket as he adored few mundane things except his wife, and who had for years been looking out for a promising youth who could be inspired with something of his own enthusiasm for the game, felt that he had at last found what he had been seeking.