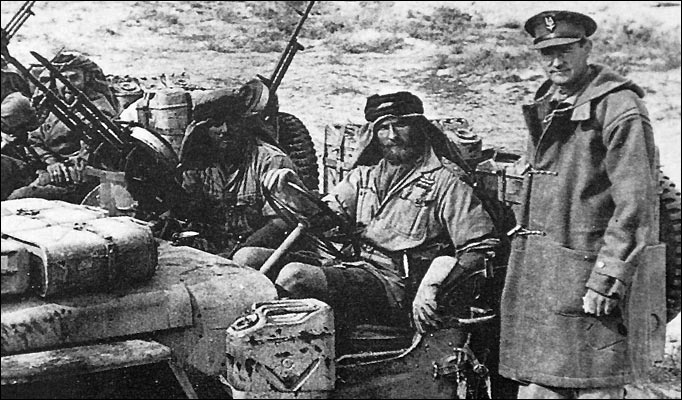 From Eastern Approaches
by Fitzroy Maclean

On my way to the Adjutant-General’s branch of GHQ I ran into David Stirling, a subaltern in the Scots Guards, whose brother Peter, then Secretary at the Embassy in Cairo, was an old friend of mine. David was a tall, dark, strongly built young man with a manner that was usually vague, but sometimes extremely alert. He asked me what my plans were. I told him. ‘Why not join the Special Air Service Brigade?’ he said. I asked what it was. He explained that it was not really a brigade; it was more like a platoon. It was only called a brigade to confuse the enemy. But it was a good thing to be in. He had raised it himself a month or two before with some friends of his after the commando with which they had come out to the Middle East had been disbanded. Now there were about half a dozen officers and twenty or thirty other ranks. He had been made a captain and commanded it. He was also directly responsible to the Commander-in-Chief. I asked what Special Air Service meant. He said it meant that everyone had to be parachute-trained. …

It sounded promising. I said I should be delighted to join.

Parachuting was only part of the training. So far the SAS had attempted only one parachute operation, and it had not been a success. They had been dropped in the wrong place; they had had difficulty in reaching their target; they had run into every kind of trouble; they had lost several of their men; their stock had gone down at GHQ. After this setback, David had come to the conclusion that, in the desert, parachuting was not necessarily the best way of reaching one’s target.

The survivors of the first operations had been picked up by the Long-Range Desert Group. This was a specially equipped, specially trained unit, which had been formed the year before primarily for reconnaissance purposes. In patrols of half a dozen trucks, carrying their own water and petrol, they pushed far into the vast expanse of waterless desert which stretched away for hundreds of miles to the south of the relatively narrow coastal strip where the Desert War was being waged. They thus circumnavigated the flank of the two armies, and re-emerged miles behind the enemy lines. There they stayed for weeks on end, hiding in the desert with their trucks camouflaged, watching enemy troop movements and returning with much vital information. The desert, particularly that part of it which was nominally enemy territory, became a second home to them.

We had to have the LRDG to bring us back (for the idea that we were ‘expendable’ or a ‘suicide squad’ was strongly discouraged by all concerned). Why, David argued, should we not make use of their trucks to take us to the scene of the intended operation or at any rate to a point from which the target to be attacked could be reached on foot? It would be a safer, more comfortable and, above all, more practical way of reaching our destination than parachuting. And it would involve no great loss of time, for, when necessary, the LRDG could cover great distances very quickly.

Henceforward the LRDG provided expert knowledge of the desert, skilled navigation and first-rate administration – vital necessities where one’s life and the success of the operation depended on getting to the right place at the right time and on carrying with one a sufficient load of food, petrol and water to last the trip. David, for his part, brought to these ventures the striking power and, to their planning and execution, what Lawrence has called ‘the irrational tenth … like the kingfisher flashing across the pool’: a never failing audacity, a gift of daring improvisation, which invariably took the enemy by surprise. The resulting partnership was a most fruitful one.

The best targets were aerodromes. From these the Luftwaffe and their Italian allies regularly attacked our convoys, fighting their way through the Mediterranean to Malta, and the Eighth Army, now driven back to the Egyptian frontier. Situated hundreds of miles behind the front, these desert airfields were not heavily defended: some wire, some machine-gun posts and an occasional patrol were considered sufficient protection. After carefully studying the lie of the land, it was possible to slip through the wire under cover of darkness, and surreptitiously deposit charges of high explosive in the aircraft where they stood dotted about the airfield. The high explosive, mixed for better results with an incendiary substance, was made up into handy packages and provided with a device known as a time-pencil which could be set to detonate the charge after an interval of a quarter or half an hour. This gave the attackers time to put a mile or two of desert between themselves and the airfield before their bombs exploded and the alarm was given. After that it only remained for them to make their way back to wherever the LRDG trucks were waiting to pick them up.

Working on these lines, David achieved, in the months that followed, a series of successes which surpassed the wildest expectations of those who had originally supported his venture. No sooner was one operation completed than he was off on another. No sooner had the enemy become aware of his presence in one part of the desert and set about taking counter-measures than he was attacking them somewhere else, always where they least expected it. Never has the element of surprise, the key to success in all irregular warfare, been more brilliantly exploited. Soon the number of aircraft destroyed on the ground was well into three figures. In order to protect their rear the enemy were obliged to bring back more and more front-line troops. And all this was done with a handful of men, a few pounds of high explosive and a few hundred rounds of ammunition.