An Interlude in Heidelberg 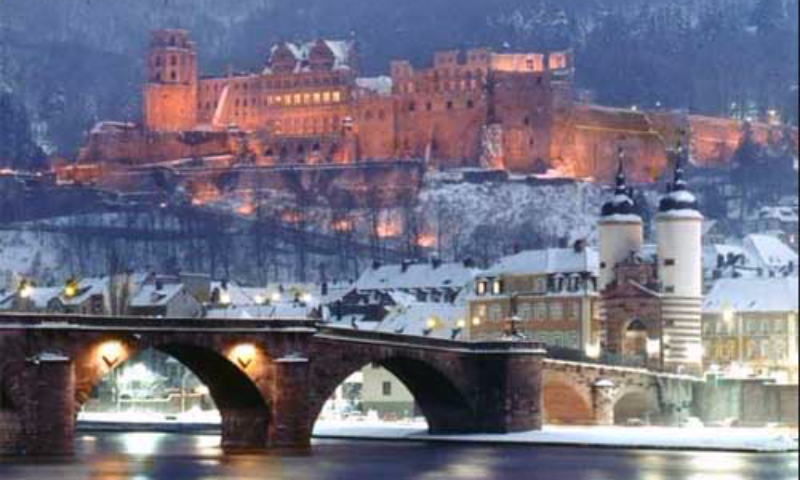 From A Time of Gifts
by  Patrick Leigh Fermor

On the far side of the bridge I abandoned the Rhine for its tributary and after a few miles alongside the Necktar the steep lights of Heidelberg assembled. It was dark by the time I climbed the main street and soon softly-lit panes of coloured glass, under the hanging sign of a Red Ox, were beckoning me indoors. With freezing cheeks and hair caked with snow, I clumped into an entrancing haven of oak beams and carving and alcoves and changing floor levels. A jungle of impedimenta encrusting the interior – mugs and bottles and glasses and antlers – the innocent accumulation of years, not stage props of forced conviviality – and the whole place glowed with a universal patina. It was more like a room in a castle and, except for a cat asleep in front of the stove, quite empty.

This was the moment I longed for every day. Settling at a heavy inn-table, thawing and tingling, with wine, bread, and cheese handy and my papers, books and diary all laid out; writing up the day’s doings, hunting for words in the dictionary, drawing, struggling with verses, or merely subsiding in a vacuous and contented trance while the snow thawed off my boots.

An elderly woman came downstairs and settled by the stove with her sewing. Spotting my stick and rucksack and the puddle of melting snow, she said, with a smile, ‘Wer reitet so spät durch Nacht und Wind?’ My German, now fifteen days old, was just up to this: ‘Who rides so late through night and wind?’ But I was puzzled by reitet. (How was I to know that it was the first line of Goethe’s famous Erlkönig, made more famous still by the music of Schubert?) What, a foreigner? I knew what to say at this point, and came in on cue: … ‘Englischer Student … zu Fass nach Konstantinopel’ … I’d got it pat by now. ‘Konstantinopel?’ she said. ‘Oh Weh!’ O Woe! So far! And in midwinter too. She asked where I would be the day after, on New Year’s Eve. Somewhere on the road, I said. ‘You can’t go wandering about in the snow on Sylvesterabend!’ she answered. ‘And where are you staying tonight, pray?’ I hadn’t thought yet. Her husband had come in a little while before and overheard our exchange. ‘Stay with us,’ he said. You must be our guest.’

They were the owner and his wife and their names were Herr and Frau Spengel. Upstairs, on my hostess’s orders, I fished out things to be washed – it was my first laundry since London – and handed them over to the maid: wondering, as I did so, how a German would get on in Oxford if he turned up at The Mitre on a snowy December night.

This Palatine sun was the dying wick of 1933; the last vestige of that ownerless rump of the seasons that stretches from the winter solstice to the New Year. ‘’Tis the year’s midnight … the whole world’s sap is sunk.’ …

That night at the inn, I noticed that a lint-haired young man at the next table was fixing me with an icy gleam. Except for pale blue eyes set flush with his head like a hare’s, he might have been an albino. He suddenly rose with a stumble, came over, and said: ‘So? Ein Engländer?’, with a sardonic smile. ‘Wunderbar!’ Then his face changed to a mask of hate. Why had we stolen Germany’s colonies? Why shouldn’t Germany have a fleet and a proper army? Did I think Germany was going to take orders from a country that was run by the Jews? A catalogue of accusations followed, not very loudly, but clearly and intensely articulated. His face, which was almost touching mine, raked me with long blasts of schnapps-breath. ‘Adolf Hitler will change all that,’ he ended. ‘Perhaps you’ve heard the name?’

Fritz shut his eyes with a bored groan and murmured ‘Um Gottes willen!’ Then he took him by the elbow with the words, ‘Komm Franzi!’; and, rather surprisingly, my accuser allowed himself to be led to the door. Fritz sat down again, saying: ‘I’m so sorry. You see what it’s like.’ Luckily none of the other tables had noticed and the hateful moment was soon superseded by feasting and talk and wine and, later, by songs to usher in St Sylvester’s Vigil; and by the time the first bells of 1934 were clashing outside, everything had merged in a luminous haze of music and toasts and greetings.

Frau Spengel insisted that it was absurd to set off on New Year’s Day; so I spent another twenty-four hours wandering about the town and the castle and reading and writing and talking with this kind and civilised family. (My sojourn at the Red Ox, afterwards, was one of several high points of recollection that failed to succumb to the obliterating moods of war. I often thought of it.)

After writing these words and wondering whether I had spelt the name Spengel right – also to discover what had happened to the family – on a sudden impulse I sent a letter to the Red Ox, addressed ‘to the proprietor’. A very nice letter from Fritz’s son – he was born in 1939 – tells me that not only are my host and hostess dead, but that Fritz was killed in Norway (where the first battalion of my own regiment at the time was heavily engaged) and buried at Trondheim in 1940, six years after we met. The present Herr Spengel is the sixth generation of the same family to own and run this delightful inn.